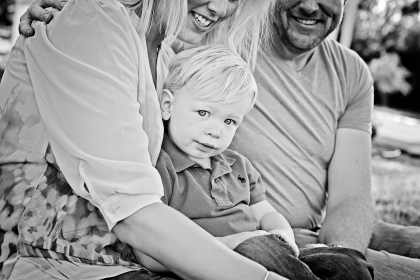 It’s a question that many folks casually (and sometimes not so casually) start asking when we’re still just children ourselves.  How many kids do you want?  I’ve seen little girls answer that question.  I’ve seen adults avoid that question.  No matter what, it’s an extremely common question being asked every day.  Some people answer openly and honestly, while others actually believe that to be a rather personal question.  And then of course, there are those that really haven’t given it a lot of thought.  That was me 10 years ago – not giving kids much thought at all.  In fact, I wasn’t really giving it much thought just 5 years ago, but I now have the cutest 2-year-old son ever.

You know that whole thing that happens.  That thing where when you’re a young adult in a relationship people ask when you’re getting married.  Then when you do get engaged, they want to know what your wedding date is.  Then once you’re married for a mere 40 minutes, they’re asking when you’re going to have a baby.  Then you finally have a baby and, yes, you know it, they ask when you’ll have another.  (How about you let me take care of this 1-week-old for a while and I’ll get back to you on that.)  Don’t get me wrong.  I love planning, I’m not a big fan of mystery and an organized schedule can actually make me giddy.  But I also believe in living for now as much as possible and I don’t necessarily like to rush things.  I guess it’s all part of humans wanting to move on to the next big thing.  Screw what you’re doing now.  What will you be doing next?  That’s the question.  And while I truly don’t know what I’ll be doing next in the kid-having category, I do think about it…a lot.  And apparently, everyone else does too.

I asked a few parents some questions about children quantities (sounds so scientific), and here’s what they said.

What part about having multiple children is most difficult?  “Most difficult is making sure that you don’t spend more time with one than the other.  My daughter (18 months) is too young to notice but I can see it in my son if I’m playing with her and giving her my full attention.   If it goes on for long periods of time, he will start to act out to get attention. At that point, he thinks negative attention is better than no attention.  So as parents, my husband and I will have to divide and conquer at times.”  -R, mother of 2

When asked about how having 3 children affects her daily life, T said “With 3 kids under 6 years old there are plenty of days I feel I have reached my limit.  But the moment passes quickly and I remember that I don’t have to be supermom, I simply have to be mom.  I love my children with my whole heart and trust that I am following God’s plan for my family.”

Why do you feel like having multiple children is a good or bad idea?  “I think that the gift of a sibling is something that is priceless. You always have an advocate, best friend, and partner in crime. I don’t know if there is a closer bond than between siblings.”  -M, mother of 1

Overall, the responses I got from parents about their child quantity opinions were quite similar.  They all very politely said that what’s best for one family, may not be best for the next.  And those with more than one child definitely seem to agree that witnessing the interactions and bonds between the siblings is incredibly special.  I’ve got two brothers and can imagine that my parents felt the same way.  It’s really quite difficult for me to imagine what my life would have been like as an only child.  I mean, sure, I would have been shopping with mom at Neiman Marcus instead of Dillard’s and I would have probably been to Hawaii at least once by now, but that’s okay.  I’ll just go ahead and keep my brothers instead.

My husband and I began our married life together focused on us, and only us.  There were no existing children involved, nor were there talks of having children.  We actually talked about not having any children more than we talked about having any.  We individually had our own inner reasoning for the No Children possibility.  And together as a couple we were, quite frankly, rather focused on having fun.  When you’re in your 20s and fun is your focus, children aren’t typically involved.  I know, I know, children can be fun.  Yes.  Of course they can…when they’re your own.  I mean, I suppose other people’s children can be fun, but I think that you mostly need to be a parent of your own kiddo to recognize that (unless you’re one of the rare I Love All Children breed of humans, which do exist, although they’re few and far between).  When we finally began discussing the Yes Children possibility, it would have actually been known as the Yes Child possibility because we sure as hell weren’t ready to discuss multiple children.  In our minds, having one child seemed like a grand idea.  You get the best of both worlds.  You get to be a parent, but you also get to be much less overwhelmed than someone with multiple children, allowing you to lead a seemingly less chaotic, less expensive and less messy lifestyle.  Sounded perfect to us.  Fast forward a few years later.  We have a 2-year-old and are actually open to the idea of having a second child.  Folks that know us might say something like “Really?  You might want another?  You barely wanted one…” or even worse “Told you so!”  But prideful, we are not.  So if the day comes that we end up with 2 children, you can say “Told you so!” all you want.  It’s cool.  But if the day comes that we end up with 4 children, could you just keep your mouth shut and bring me some tequila?