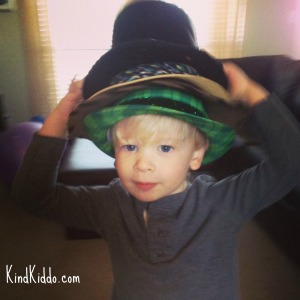 My kiddo loves hats.  Like, he LOVES hats.  He loves actual hats and he also likes using other household items as hats.  Hell, he even likes to turn things into hats that don’t look anything like a hat at all.  So, you get the point.  He also loves Mickey Mouse Clubhouse right now.  We have one DVD of that show that has multiple episodes on it, so as you can imagine, we’ve all seen those particular episodes (or just heard them while driving the car) many, many times.  There is a scene where there is a big fan blowing wind, and it ends up blowing Goofy’s hat off of his head.  They yell “Come back here!” and when he gets the hat back he says, “Gotcha!”  Rowdy (he’s nearly 3) reenacts this scene using Jesse’s red hat (from Toy Story) and his little teddy bear.  He says, “Come back here!” while making Teddy chase after the hat.  He even throws his own hat in the backyard pretending that the wind carried it off just like it did with Goofy’s hat.  So, anyway… he and I had to make a visit to his doctor the other day on an extremely windy day.  Rowdy wanted to wear his black top hat into the doc’s office (he wore it in my step-brother’s wedding and he loves it), so of course, I let him.  When we were on our way back out to the car I reminded him to hold onto his hat so that the wind didn’t blow it away.  Well, what do you know?  The wind blew that hat right off of his head (I think he let it happen on purpose) and began carrying it away rather quickly down the street.  My initial reaction was to run after the hat (I’m 8 months pregnant…yeah), which I started to do.  But when I realized that I was leaving my toddler on the side of the street alone to run after a hat I immediately turned around to go back to him.  When I turned and look at Rowdy, he was beaming.  He screamed “Mommy!  Hat!  Come back here!  Mommy!” with a HUGE smile on his face.  He was in heaven.  We were living a real life Mickey Mouse Clubhouse moment.  Weeks and weeks of watching that episode had preceded this event, and Rowdy couldn’t have been happier to see it all go down in real life.  I quickly grabbed him up and began jogging down the road to fetch the still moving hat.  Here I was, 8 months pregnant with yet another big baby, carrying a not-so-small purse, a not-so-small toddler as we cracked up laughing the whole way running after that damn hat.  Thank god, we actually got it.  “Gotcha!”, Rowdy said when I grabbed the hat.  He wanted to hold it and I said, “Oh, no sir.  I’m carrying it back to the car.”  I’m sure anyone watching that scene was giggling.  We had to have looked ridiculous.  And believe me, I paid for it for at least 24 hours.  My body hurt real bad.  I was mildly scolded by both my husband and father for doing such a thing in my condition.  But, hey.  It’s done.  I felt strong enough to make it happen at the time.  I didn’t feel like I was endangering myself or my unborn child.  And most importantly, I literally watched one of my child’s little dreams come true before my eyes.  It was adorable, fun and hilarious.  And quite a show, I’m sure.